Hi everyone sorry it’s been a while since our last update, but we’ve been busier than ever during the run up to Christmas on our Uptiding trips. Firstly we hope you all had an amazing Christmas and we hope 2019 is a prosperous one!

We would like to thank customers and friends old and new for a great 2018!

Now let’s get down to the fishing!!!!

We have been flat out running Uptiding trips 8am till 4pm pretty much daily due to an unusually mild winter so far and with the mild weather we’ve been getting to sea more than expected.

We finished 2018 with a surprise and our very first ever conger eel which weighed on at 3lb 15oz and was released straight back after we got a picture. This is relatively small for a conger as they can grow in excess of 100lbs plus!

Also we have had excellent numbers of Cod over the rails in the run up to Christmas with around 70 to 100 cod coming aboard between 2lb and 6lb. Even over the Neap tides it fished well with plenty of colour in the water the fish were feeding and the unwashed Squid,Mussel and Lug worm worked a treat.

2019 so far has got of to a slow start we had a blow from the north west for a few days and that stirred things up, then the Spring Tides set in and when we hit the Uptiding grounds we found it hard work with around 20 Codlings on our first trip of 2019.

Our second trip of 2019 was pretty much the same, hard work and around 20 Codlings but we did get a cracker of a cod at 7.6lb which we have just been informed has made it into Sea Angler Magazine.

We are not sure of the reason for the sudden dip in numbers and we are confident that it will pick up again once the recent stir up settles.

All the best and tight lines for now !! 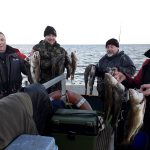 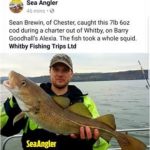 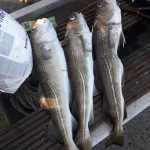 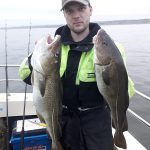 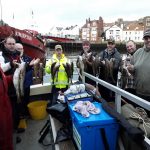 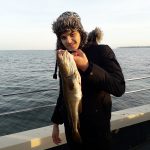 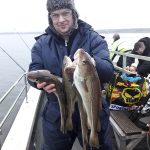 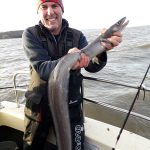 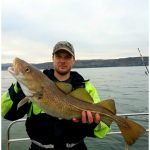 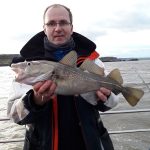