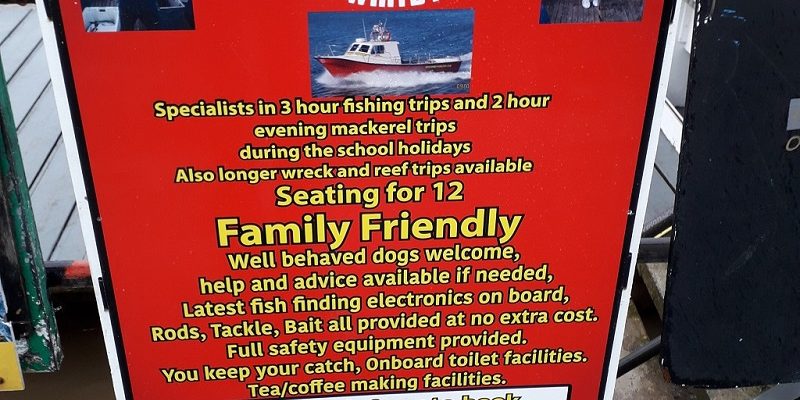 The tides have not been on our side, with big Spring Tides up to 5.7 metres, together with a Westerly breeze gusting up to 30mph some days, meant the anglers were struggling to hold bottom once the tide was away.

We had slim pickings during the slack water periods over the wrecks, but not the numbers we were after, so we switched to the inshore marks of Runswick Bay and boy did it pay off!

We encouraged the Anglers to fish with Shads and baited Hokeyes, and the fish soon poured over the rails with Codlings up to 6lb coming aboard, as well as Lesser Spotted Dogfish and Ballan Wrasse as well as the usual Whitings.

The Mackerel have again became few and far between, but we feel that once the tides neap again this coming weekend, we should hopefully see them return in numbers.

Each trip has averaged around 40 to 60 fish with lots of Codlings again being safely returned to fight another day.

We would also like to announce we are now in the Whitby Charter Skippers Association (WCSA) and will be participating in all future Fishing Festivals, including the Summer Festival which begins Saturday 23rd June and runs up until the 15th July with a top prize of £5000 up for grabs you don’t want to miss it!

2nd prize is £1000 and 3rd place wins £500 there are also Ladies and Junior Sections as well as Daily Prizes for the best three fish on each day.

For more info or to book a trip in the festival don’t hesitate to Get In Touch.